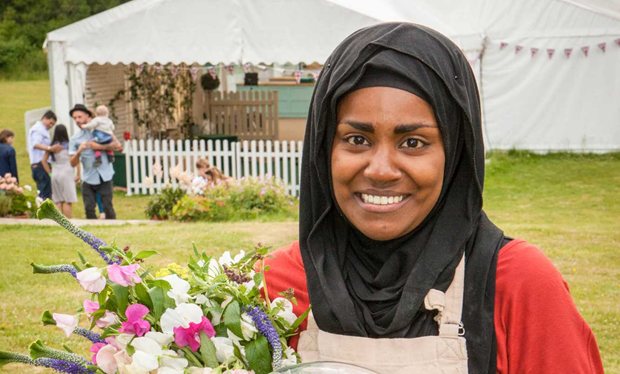 Nadiya Hussain has risen to the occasion to be crowned the winner of this year’s Great British Bake Off.

Nadiya, 30, from Leeds, baked a “big fat British wedding cake” adorned with jewels from her own wedding day as the showstopper in Wednesday’s final.

And Tamal Ray struggled when the creme patissiere for his toffee and marmalade iced buns failed to set in time.

Nadiya has become the sixth winner in the show’s history.

She said: “Bizarrely, I found the final was one of the least scariest [rounds] and I really enjoyed the experience the most out of all the filming days.

“I felt at that stage that I could do really well or really badly, I had nothing to lose, so I went into the tent and gave it everything I could.

“The showstopper was a celebration cake, and as I never had my own wedding cake I wanted a proper iced wedding cake.”

For the showstopper, the bakers were asked to create a classic British cake with at least three tiers.

The Great British Bake Off Final live – as it happened

Nadiya, who did not have a wedding cake because she got married in Bangladesh, chose to bake her husband’s favourite – lemon drizzle. Its stand was decorated in red, white and blue sari material.

She said: “At the very end of the filming I took the cake out to my family’s table and we all had a slice. So my husband and I did get our wedding cake after all.”

Nadiya emerged as the winner despite coming last in the technical challenge in the very first episode.

She said her family life would now “carry on as normal”.

“Being a mum to three small children under 10 is pretty time consuming, but I wanted to have my own adventure, which with a very supportive husband and a belief in my own ability, I can now carry on having my adventure,” she said.

“I am really looking forward to see what will happen.”

The three finalists were asked to make iced buns for the signature bake and raspberry millefeuille for the technical challenge.

For the showstopper, Tamal chose to construct a sticky toffee pudding cake, with a design inspired by a deserted Chinese fishing village that had been reclaimed by nature.

Ten million people tuned in to last week’s semi-final – the biggest audience for this series up to that point.