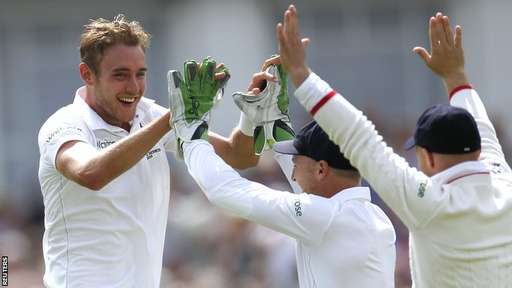 So come on then, just how good was that spell from Stuart Broad? He tore through the Aussie batting line-up like an unstoppable hurricane through a matchstick factory, sending batsman after batsman packing with a probing length and lethal seam movement. He was, quite simply, unplayable.

Where does it rank among the great England bowling performances? Better than Bob Willis’s 8-43 at Headingley ’81? Up there with Devon Malcolm’s 9-57 against South Africa in 1994?

Well, in global terms, it was something pretty special. 8-15 are the best figures recorded by a pace bowler this century – only Muttiah Muralitharan and Rangana Herath have managed better in the last 21 years, and those were both on raging turners.

But this is England we’re talking about. It’s never over until it’s over. And while the fat lady might be having a salt gargle and going through her vocal warm-ups, she hasn’t quite burst into song just yet.

Just ask yesterday’s hero of the hour, Stuart Broad. “Australia will fight back,” he said last night “That’s the sort of characters they are and we want to try to bat them out of the game.

“It was the perfect day for us but it all starts again tomorrow.”