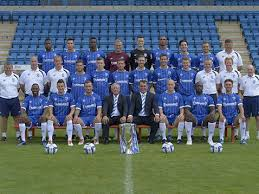 Gillingham staged a remarkable comeback to beat struggling Fleetwood Town 5-1 at the MEMS Priestfield Stadium this evening and extend their perfect home record this season.
After falling behind on 12 minutes, goals from Jordan Houghton, John Egan and Rory Donnelly’s first two for the Gills turned the game around, before Cody McDonald completed the scoring late on.
Manager Justin Edinburgh made two changes from Saturday’s defeat at Barnsley, as Houghton and Donnelly replaced Emmanuel Osadebe and Ben Williamson respectively.
And Houghton almost scored within the opening 120 seconds, forcing Town goalkeeper Chris Maxwell into a brilliant save from a powerful volley.
Town had two good chances shortly after, but Jamille Matt miscued his header from ex-Gills loanee Amari’i Bell’s cross and then headed over from Bobby Grant’s corner on 10 minutes.
The visitors then took the lead on 12 minutes: Brennan Dickenson was ruled to have fouled debutant Jack Sowerby, and Grant’s curled free-kick beat Stuart Nelson.
But they were ahead for just six minutes: Ryan Jackson’s throw was flicked on by Houghton, and Donnelly was at the back post to score his first goal for the Gills. And with the hosts growing in confidence, Luke Norris’s spectacular overhead kick on 21 minutes almost put the Gills in front.
The end-to-end nature of the game continued as Grant somehow headed over from six yards when it seemed easier to score, before the Gills went 2-1 up on 28 minutes. Houghton found Jackson on the right wing, he got the better of Bell and the midfielder continued his run to slide onto the cross and head past Maxwell.
And before you knew it, the Gills further increased their lead. Dickenson’s free-kick wasn’t cleared, and Egan’s low shot on the turn passed through a number of players and into the net.
Donnelly wasn’t finished there: on 34 minutes he picked up a loose ball in midfield, beat a couple of defenders and brilliantly chipped it over a helpless Maxwell from 25 yards to make it 4-1.
The Gills still had work to do in defence, despite the favourable scoreline: Egan did well to block Lyle Della-Verde’s blazed effort, and Stuart Nelson produced a stunning save to keep out Grant’s volley on 44 minutes.